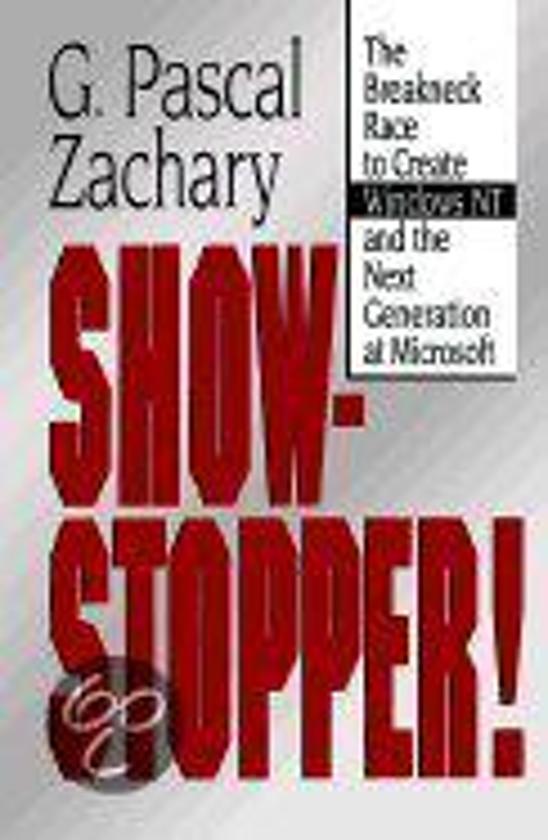 The phenomenal success of Bill Gates and his Microsoft Corporation hinges, above all, on an ability to look to the future. Not content with holding a bulging share of the market for software applications, nor with dominating the crucial operating systems business by virtue of its DOS and Windows programs, Microsoft is always looking to the future. And the future for Microsoft now goes by the name of Windows NT. A software innovation of the first order, NT could redefine the standards for computing throughout the world, into the next century. NT endows inexpensive personal computers with the capabilities of giant mainframes -- yet without sacrificing the inherent flexibility and appeal of PCs. Showstopper! is the inside story of this stunning breakthrough in computer technology. Stripping away myth after myth, this unprecedented tale lays bare the messy, wrenching reality of winning innovations. To date, America has dominated the global software industry through creating cutting-edge code and by depending on both the ingenuity of a few visionaries and the coordination of huge, costly teams of programmers and testers. Gates -- a managerial genius as well as a technical visionary -- promotes an atmosphere of controlled chaos at Microsoft, and the story of Windows NT perfectly reflects this ethos. The brain-child of David Cutler, a legendary programmer recruited by Gates in 1988, NT took five years and $150 million to complete. For much of that time, the massive program demanded the obsessive attention of more than 200 testers, writers and technicians. Focusing on Cutler's mercurial ability to inspire and lash his team, Showstopper! brilliantly portrays the human drama of this mammoth undertaking exposing the pressures, disappointments and ultimate triumph that emerge from a cauldron of constant deadlines, competition with peers and a perpetual war against the inevitable and ubiquitous bugs in the program -- among them the potentially lethal "showstopper." Gripping vivid and accessible, Showstopper! reveals the outsize personalities that stand behind great advances: the mavericks, the organizers, the fixers, the motivators. Even as they wrestle with forces that threaten to tear them apart, Cutler and his team feverishly hunt for